Deprecated: Assigning the return value of new by reference is deprecated in /home/download/IM-Framework/adodb/adodb.inc.php on line 888

Deprecated: Assigning the return value of new by reference is deprecated in /home/download/IM-Framework/adodb/adodb.inc.php on line 1913

Deprecated: Assigning the return value of new by reference is deprecated in /home/download/IM-Framework/adodb/adodb.inc.php on line 1985
 New MOTORIZR Z6 is the first Motorola MOTOMUSIC mobile device to integrate - DownloadForge

At the 2007 International Consumer Electronics Show (CES), Motorola announced it is delivering on an existing relationship with Microsoft Corp. to integrate Microsoft Windows Media technologies, into Motorola's MOTOMUSIC mobile devices. Motorola and Microsoft have been working to build new music mobile devices that bring choice to consumers.

Built on Motorola's new Linux(TM)-Java(TM) software platform, the MOTOMUSIC devices give consumers an easy music sync experience with Windows Media Player on Windows XP and Vista-based PCs and access to content from a wide range of online music stores from around the world. Now consumers can not only take their personal CD collections with them, but also can transfer music acquired from hundreds of download or subscription stores and playback on their Motorola handsets(1).

"The MOTORIZR Z6 is the world's first Linux-Java music phone integrating the full suite of Windows Media technologies," says Scott Durchslag, corporate vice-president of Product and Xperience Invention, Motorola Mobile Devices. "This will enable consumers to access whatever music content they want, from the music store they love wherever they are as simply and seamlessly as possible."

"Motorola's use of the range of Windows Media technologies provides new choices for consumers and mobile operators alike in the rapidly growing area of mobile digital music," said Amir Majidimehr, corporate vice president of the Consumer Media Technology group at Microsoft. "Through its support of both subscription and purchased content, and easy syncing with Windows PCs, the MOTORIZR Z6 will enable millions of consumers around the world to enjoy high quality music experiences wherever they are."

In addition to making the new MOTOMUSIC handsets interoperable with PCs, Motorola and Microsoft plan to provide MOTOMUSIC handset offerings that are tailored for discovering and acquiring music over an operator's 3G network. This rich music offering will help provide operators with handsets optimized for efficient music downloads over a 3G network. Consumers will benefit from quick and easy access to high quality music on the go. 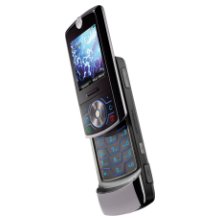